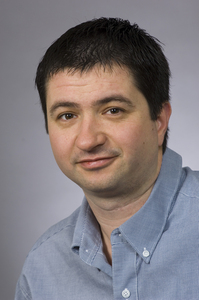 Ken Bosnick is a Principal Investigator with the National Institute for Nanotechnology, a new research institute in Edmonton, Canada formed as a partnership between the National Research Council of Canada and the University of Alberta. Ken has previously held post doctoral appointments at Cornell University and Columbia University. He received his BSc in Engineering Chemistry from Queen’s University and his PhD in Experimental Physical Chemistry from University of Toronto. His current research interests focus on the development of large-bore chemical vapor deposition reactors for the prototype scale synthesis of nanostructured materials, the development of the supporting metrology, and the development of devices and intermediates based on these materials.