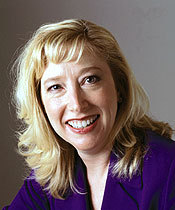 Kelly Carnes is an entrepreneur, and nationally recognized technology policy expert and thought leader. She has served the high tech industry for over 20 years, holding leadership positions in technology business, law and government.

Before founding TechVision21, Ms. Carnes served eight years at the highest levels of the U.S. government, working first as an aide to then First Lady Hillary Clinton, and later, as a senior technology policy advisor to four Secretaries of Commerce. Most recently, Ms. Carnes served four years as Assistant Secretary of Commerce for Technology Policy. As a Presidential appointee, confirmed by the U.S. Senate, Ms. Carnes represented the Administration before Congress, and was a liaison to, and advocate for, the technology business community. Ms. Carnes also represented the United States in negotiations with foreign governments, and in multi-lateral fora, including the Organization for Economic Cooperation and Development.