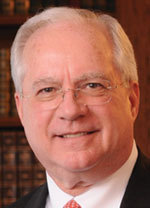 Mr. Moffitt became president and CEO of Nanosphere in 2004. Moffitt is a 30+ year veteran of the diagnostics and medical device industry, having spent the last 20 years developing novel technologies into products and solutions that have helped shape the industry and generate significant shareholder value. Prior to Nanosphere, he served as president and CEO of i-STAT Corporation, a developer, manufacturer and marketer of diagnostic products that pioneered the point-of-care blood analysis market. Moffitt led i-STAT from its early stage to commercialization and from the company's IPO in 1992 to its acquisition by Abbott Laboratories in 2003. Prior to i-STAT, Moffitt held increasingly responsible executive positions from 1973 through 1989 with Baxter Healthcare Corporation, a $7 billion manufacturer and distributor of healthcare products, and American Hospital Supply Corporation, a $3.5 billion diversified manufacturer and distributor of healthcare products, which Baxter acquired in 1985. Moffitt earned a B.S. in zoology from Duke University.